Weather.com and I are having a disconnect problem. It promised me partly sunny today and mild weather. I experienced totally cloudy and really cold. None the less, there is a calender to be completed.

Last year my theme was head shots, this year we decided to take them on location to show a bit of Oregon. Great idea, but waiting until the second week-end in November, not so bright.

Once we’ve decided on a theme, we have to select the models. I think we’re going with the golden oldies and since most of our gang is officially in the double-digits, it’s not hard to find models. Willing and cooperative can be a challenge. I was painfully reminded that I waited a little to long to get a rockin’ portrait of Roxy.

This is Murphy, he turned 13 in June. He’s gorgeous, but already he’s starting to get the skinny butt and ribby look no matter how much we feed him.

I know most of the nook and crannies within an hour’s drive of Salem pretty well. I thought a greyhound in front of a covered bridge would be pretty cool.

Eh, not so much once I saw the first picture (and having Buddy’s portrait turn out so stunning raised the bar for the rest of them). So poor Murphy had to wait as I zoomed in and zoomed out, moving left and right to find just the right background.

When I’m shooting the dogs I am on the ground nearly the entire time. We’ve gotten a lot of rain the last few weeks so my butt and knees are freezing and soaking wet by this point, but the minute I saw the old water-powered mill house, I knew the bridge was history.

Once I have scouted out my location, Karen’s job is to

The water was much higher in the creek than I expected and the leaves were kinda slick, so Karen also had safety patrol. Her job is so much harder than mine.

On the ride home, the excitement of going for a ride and a walk in the park were over. Murphy settled in against my camera bag and checked out for the entire ride home.

Since I don’t trust our dogs off leash, it becomes my job to clean up the photo and get rid of the leash if it doesn’t look obvious.

This is Murphy’s calender portrait. It took me thirty minutes from first click to loading him back up the car.

Days seem to be flying by at break neck speed. Sometimes I don’t even feel like I can keep up. I remember when my girls were growing up, I tried to remember every change.

When I look back at older photos of the hounds, I’m always amazed at the changes they have made.

Murphy has aged quite gracefully. What is it about men? Why do they look distinguished as they turn white?

Joey has always been a striking and handsome black hound dog. He had very little white and his coat really shined in the sun.

Compared to Murphy, he has barely changed. OK, he’s a little whiter.

Minnie is about nine months old here, she still has her puppy coat.

Skirvee joined the pack at five months old. He had this beautiful black mask.

Flocko was 11 months old. This was the day I bought him to be our very first racer. He had a lot of black and man-o-man was he gorgeous. He knew it too.

I often think we ought to invest in Grecian Formula 44 for Flocko. I think I miss his black mask the most.

Cleaning and organizing are not what the dogs had in mind for their vacation. They are not happy with us at all.

If you’re curious, this is what the dumpster looked like Saturday morning. We couldn’t help ourselves, we had to throw something into Friday night.

The good and the bad news was that the basement flooded this winter. It is really what prompted the garbage bin.

We always thought we would have a garage sale and get rid of this crap. Extra chairs, the big giant 12 ton televisions. Water damage makes cleaning real easy. We’ve pulled up carpets, pitched beds, chairs, clothes… It’s pretty amazing how quickly 30 cubic yards is going away.

I love summer evenings just as the sun is going down. It’s cooler and the dogs enjoy just hanging out.

I will spend hours just sitting far enough away with my camera that I can take one head-shot after another. Their facial expressions change so many times as they listen and watch their buddies.

Murphy is especially fun because his ears are so expressive. I swear I can tell what he is thinking.

It’s the week-end, it’s the Pet Blog Hop! Give your pets a big hug and join the hop. 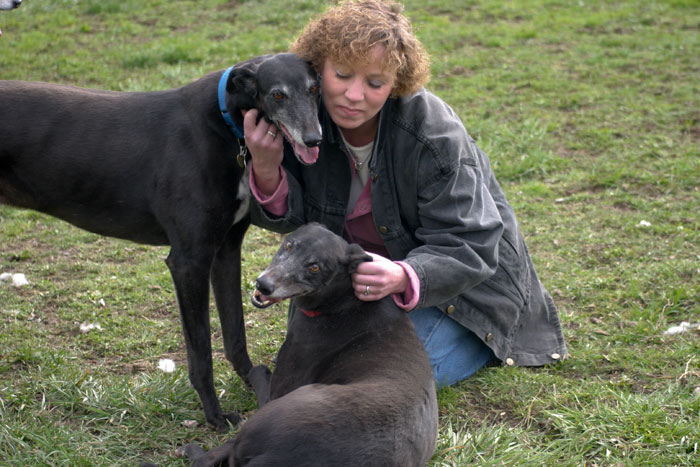 Nine years ago Memorial Day week-end you and your friend Bentley became one with the acre and I followed just a few short months after that. Murphy, I have to tell you that you are one of the sweetest hounds, so gentle and loving.

Everything looks so different from that picture now. Bentley lost his fight with osteosarcoma, you have a lot more white around the muzzle and we’re not even going to discuss my new wrinkles, gray hair and body parts that currently sag around my knee caps. 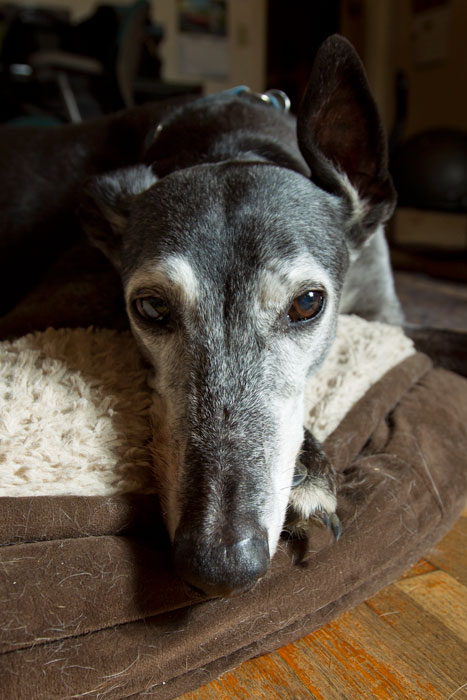 13 years old is so bad handsome. 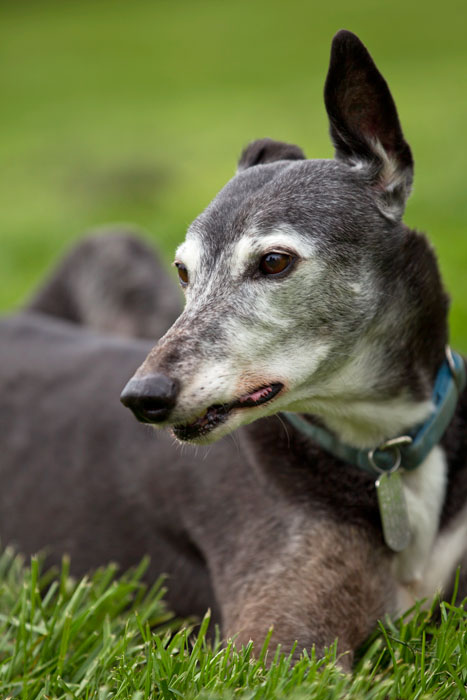 I see many more days of lazing around in the grass for you. 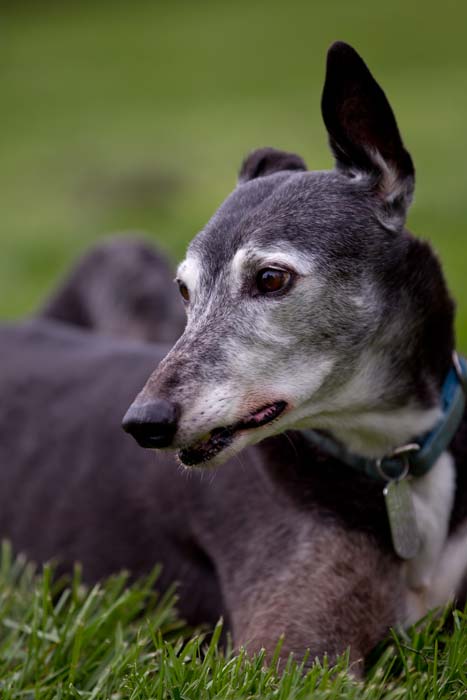 Spring is such a grand time in the gardens. The greyhounds can actually get out and enjoy their yard and Murphy is no exception.

Since the day he came home nine years ago, he has been the one to wait patiently for spring and freshly mowed grass. 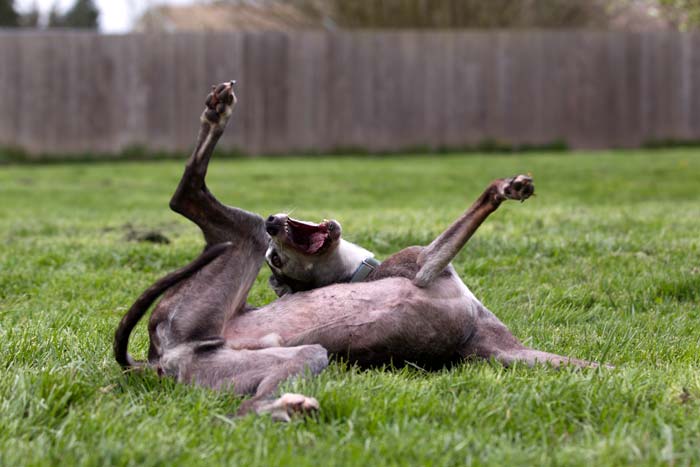 Nope, nothing beats a good roll in the grass. 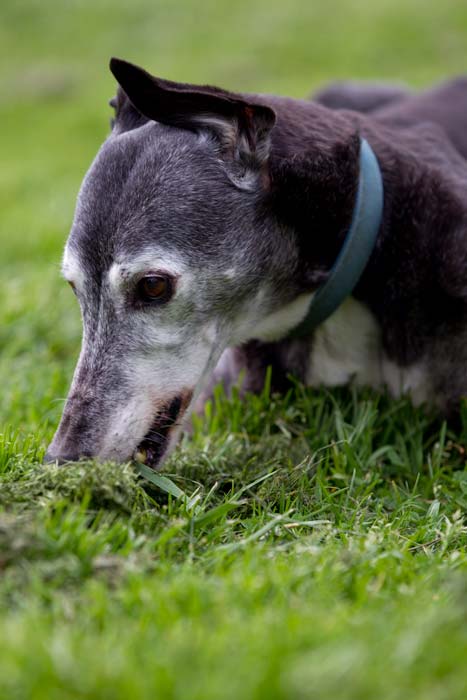 The only thing better than rolling in the grass, is grazing. 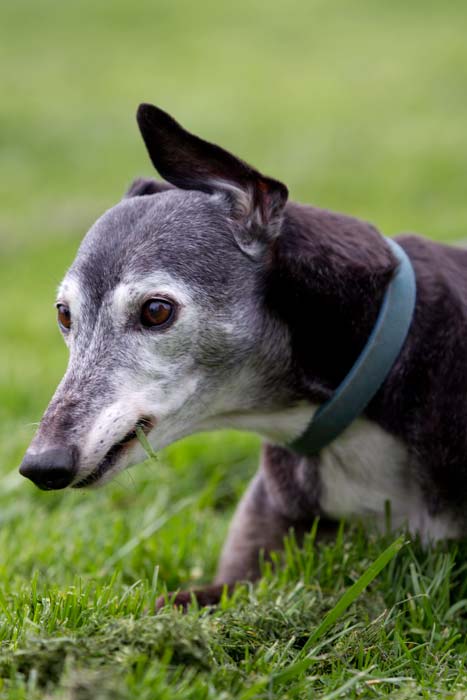 If you’re not busy enjoying spring, please join us for the Pet Blog Hop.

We are running an ad campaign at work. One of the ads included this photo of Murphy. It was going to run in all of the regional newspapers. Murphy was almost a star until at the last minute it got pulled. We’re talking already at the papers almost.

Sigh. Don’t worry Murph, you’ll always be a star in my eyes.

I so looked forward to my four-day weekend. Pretty much busy every minute of it.

And now it is Sunday night and I am not looking forward to going to work tomorrow.

Wonder if anyone would notice if I played hooky?