The Daily Dog Challenge on Flickr today is Show us how your dog is royalty today. This is Blender. She’s the reigning queen of the gardens.

Blender came to us nearly 10 years ago with many firsts. She was our second greyhound and our first foster hound. She was our first failed attempt at fostering. She was our first time with an extremely shy dog. I have many wonderful memories of my youngest daughter reading her homework to Blender night after night. And I will never forget the night Blender left the safety of her bedroom and kennel to find out where Holly had disappeared to.

Blender has been with me the longest of all the hounds. She’ll be 13 this year and age is starting to take a bit of a toll on her body. She’s moving slower and in the cold I see her favoring her hind legs.

None the less, Blender is queen and all of the other hounds respect her.

There was a party in the gardens today. It will probably be a hot topic of conversation all week long.

Everyone came and everyone had a grand time.

Well, some may have had just a little too much fun.

Blender, I find it so hard to believe that 9 1/2 years ago you were so shy and so black.

Look at you now girlfriend! I believe we call this salt and pepper.

Still gorgeous after all these years. Happy 12th birthday Blender.

And for the honeymooners in Mexico… Emma is marking off the days on the calendar until her mommy and daddy get home. :o))) 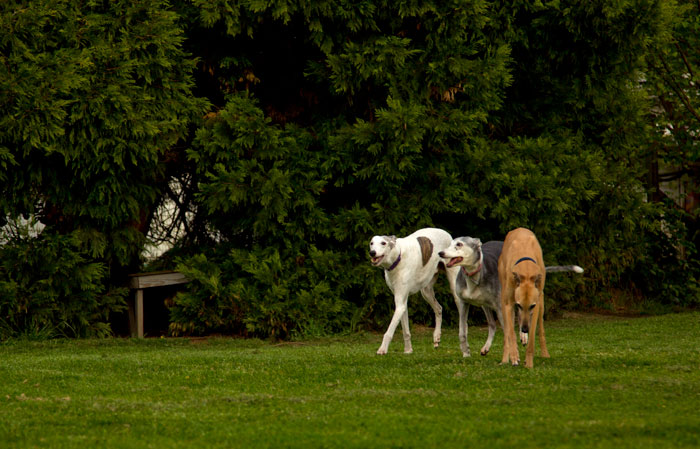 May is party central in the gardens. Everybody it seems is celebrating a birthday and Adam is leading the pack. 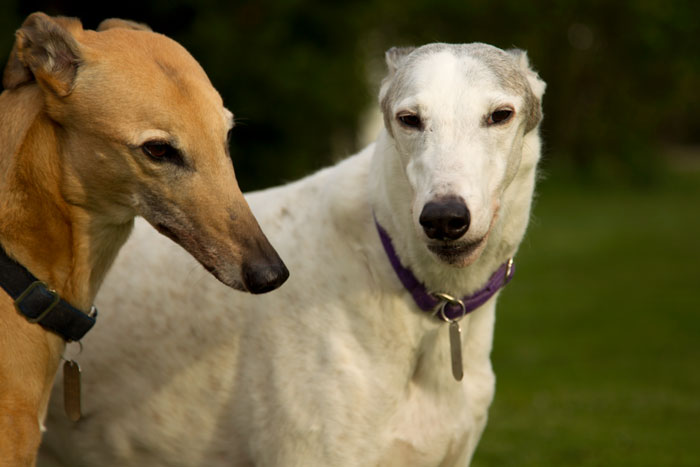 Buddy and Adam discuss where they are going for their first bone. Of course, since Buddy is totally toothless, he’s thinking there had better be a selection of softer items. He does have a few years on Adam. 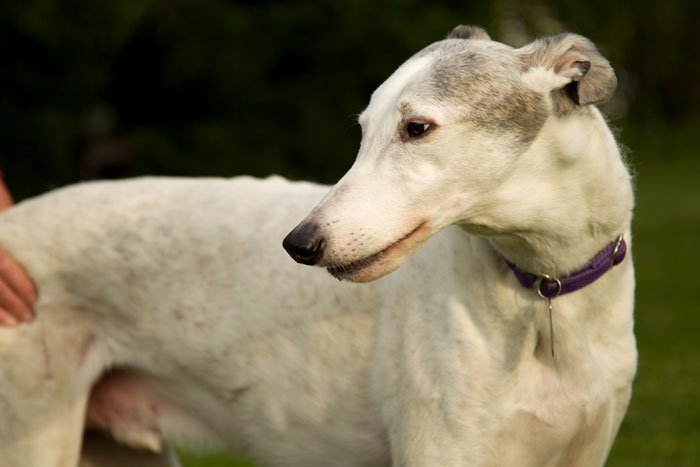 While we were out this evening taking Adam’s birthday picture, we noticed a thickening under Adam’s jaw. It’s a hard lump.

I’m not going to lie, we have been way too many hard lumps in our history with greyhounds. 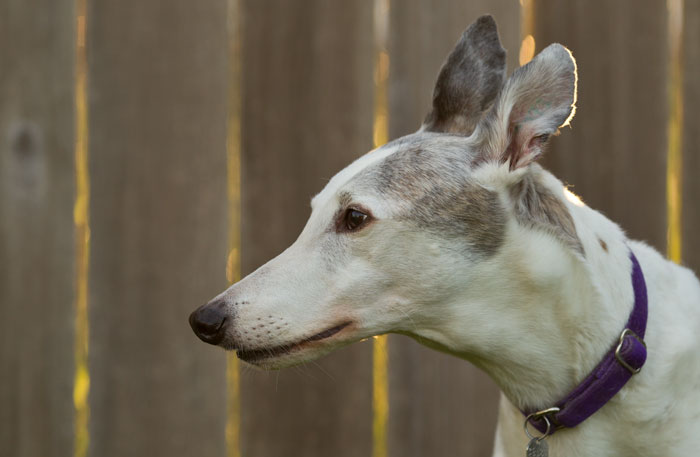 I made a mad dash back to the pictures I took on Tuesday night and there isn’t a lump there so I’m hoping beyond hope that when I take him to the vet clinic in the morning it’s nothing. 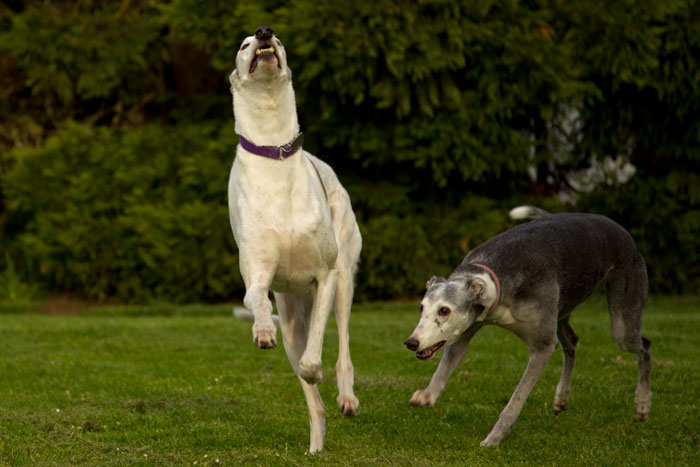 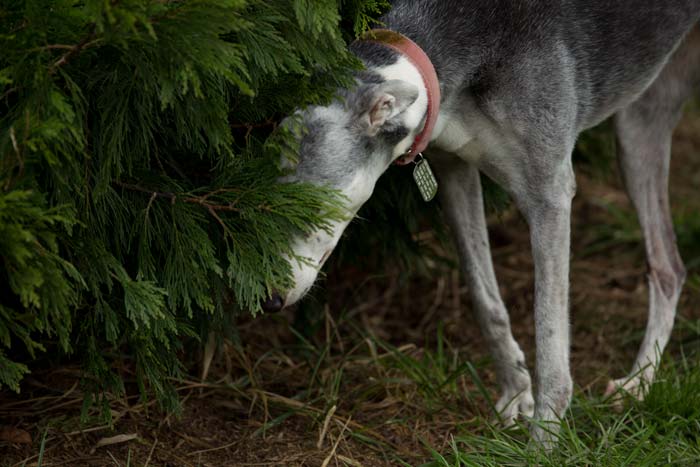 OK, our dogs do weird things. Our yard has multiple, big pine trees. They provide hours of entertainment for the greyhounds. They’ve almost reached China where they dig beneath them. Ring around the pine tree is a daily favorite. Bark at the squirrels living in them is a huge hit. 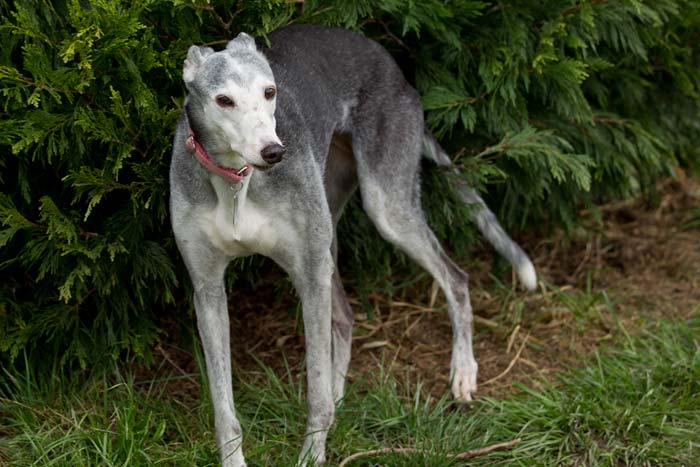 Once the trees start to dry up after the rainy season, they start leaning into trees. The lower branches become leaning posts. And then, they walk back and forth, pacing.
It has got to be one of the weirdest things, it even has a name. Trancing.
There is nothing more joyful than rubbing your hands across a soft coat and suddenly and unknowingly getting stuck… in pine pitch. 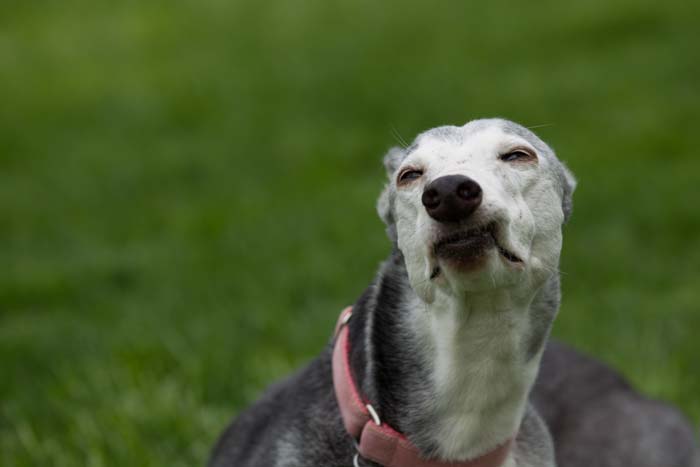 But oh the satisfaction. 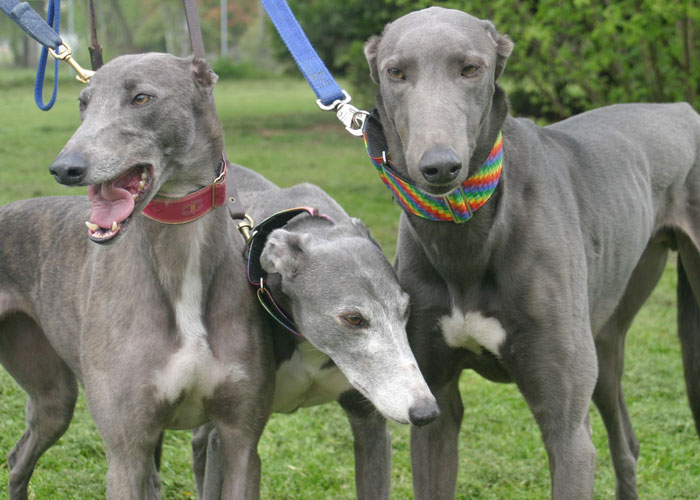 And the race was on. Nothing like a little fresh squirrel meat to be thankful for.

Not to be out done, her twin sister Jillian was right there with her.

Of course, Blender was the smart one. She wasn’t foolish enough to be out in the cold, instead she remained close to her bowl. Waiting for the feast to begin.

The hounds of Greyhound Gardens would like to wish every one a very Happy Thanksgiving.

Holiday or not, the greyhounds had us up at the crack of dawn. We still have freezing temperatures and they were only interested in a quick run and breakfast.

Looking to the east, Karen and I scrambled out the door so that we could enjoy the sunrise.

I have much to be thankful for.

Our dogs, they rock my world. My partner that indulges me everyday. My friends, many of whom are connected through the greyhounds, one way or another.