“When do we say when?” I ask. “It’s a conversation you may have to have soon. The light is getting dimmer at the end of the tunnel”, responds the vet.

Most rides start out with an uncertain jerk. An unexplained limp, a lack of appetite, vomiting, diarrhea or lethargy. Any and all of these symptoms simply result in a trip to the veterinary clinic.

Day 1: Adam’s ride did not start with jerk but rather a slow start. My first visit to the vet was because he just wasn’t Adam. He didn’t bark at me when it was time to eat, he just laid on his bed, waiting quietly.

Day 2: He had poops that were almost neon orange, just short of glowing in the dark. His blood tests were normal except for the bilirubin, which was slightly elevated.

Day 3: Still lethargic, we went back to the vet. Abdominal x-rays were almost as inconclusive as the the blood work.

Day 4: Adam was scheduled for an ultrasound, again, nothing specific was found and while the vet apologized for ordering an expensive test, I assured her that it was the best money i had spent yet. What we weren’t expect was a dramatic drop in Adam’s red cell count. Normal for a greyhound is somewhere around 55-60, Adam bottomed out at around 14-20. More blood tests were ordered. A Coombs test (a test to look for antibodies that act against the red blood cells) was given and came back positive indicating that Adam probably had AIHA.

Adam was sent home with high doses of prednisone and would be in and out of the vet clinic with twice daily blood tests and IV treatments. For the first several days, his appetite was excellent.

Day 6: No indication that the blood was improving on just the prednisone alone. Imuran was added to his drug cocktail of 40 mg prednisone twice a day, 375 mg clavamox twice a day, 1 gram sucralafate 3 tiems daily and finally, over-the-counter prilosec.

Physical examination concluded that a heart murmur was developing, one that was not there earlier and they thought that it was probably from the anemia.

Day 8: Adam had developed a severe arrhythmia along with the murmur and the red blood cell count was still low. Blood tests did show that the cells were beginning to regenerate, a small but bright light.

The clinic did an ECG that truly came back as nothing normal. We all had hope that it was from the anemia. They consulted with a cardiologist and it was diagnosed with polymorphic ventricular arrhythmia and an echocardiagram was ordered for the next day.

Day 9: Still not much improvement in the red blood cell count, it was up to 30, the arrhythmia or the murmur. An ultrasound of the abdomen showed some fluid in the abdomen that wasn’t present the week before and pancreatitis. Cyclosporan was added to his cocktail and the imuran was discontinued thinking that maybe the imuran had caused the pancreatitis.

Day 10: Adam showed no interest in eating. This was the second time he had refused his food, he was very weak and we were scared. The minute we got into the room at the clinic, he threw up the entire contents of his stomach and laid down on his blanket. At this point, I was quite scared. Again I left him on IVs. I went in to pick him up at 6 p.m. and Adam showed no improvement. He was lethargic and sad.

When I got home, I sat down beside him on his cushion with some freshly boiled chicken. I kissed him softly and stroked his fur assuring him that everything would be OK. At this point it was up to him. If he wanted to pull through, we would go the distance, if he was just to tired, we understood. He stood up walked away from his bowl of chicken and laid down on a cushion in another part of the room. I sat there and sobbed.

When Karen got home from work we decided that Adam had endured enough. He wasn’t going to go through any more. So we stopped all of the drugs except the 30 mg twice a day of prednisone and the sucralafate. I promised him no more daily blood tests and trips to the clinic. Still hoping we feared our ride was coming to an end.

Day 11: Adam got up, went outside and came in to eat one and one-half chicken breasts. At that moment, we knew the ride was not over.

He lost 15 lbs. and even at a healthy weight a greyhound looks skinny. Adam was emaciated but he kept eating.

Chronic illnesses suck. Mystery illnesses suck. Medicine is a crap shoot. Adam was diagnosed with Autoimmune Hemolytic Anemia on April 9, 2008. Four weeks after his diagnosis, he is steadily improving but our hopes and fears continue to ebb and flow like the tide.

Month 5: Adam’s blood count has stayed over 50 now for four weeks. His weight has maintained, he’s pink everywhere and his prednisone has been decreased to 5 mg. every other day. It has been a greyt summer for Adam.

Month 6: October 16, 2008 Adam’s blood count has remained normal. His urine is free of bacteria and he is finally off of all medication. Our happy, happy boy is back. 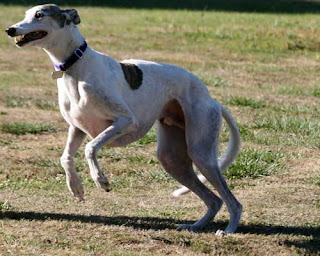