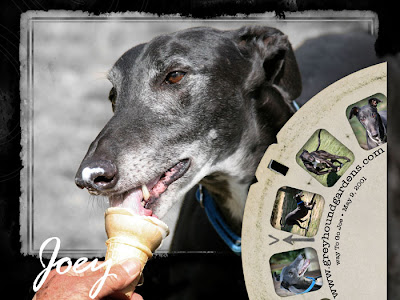 Joey was calendar boy for March. Sleek and gorgeous, Joey came to us as a “spook” dog. He was scared of his own shadow. If he were a child, he would probably have been labeled as an autistic child, instead, he was just a really shy greyhound.
At the time Joey came up to have the ice cream cone, he had been with us for four years. Not once in that four years did he come this close. He stood close by, but he wouldn’t come near us.
This summer he started showing an active interest in the food we were eating and on a whim I ran to Dairy Queen and bought him a cone. It was a huge success.
Earlier last fall, Joey stood close enough to have his ears scratched. It was probably one of our most joyful moments. 4 1/2 years we waited for that ear scritch and now every day he noses his way through the hounds just to have his ears scratched.
Way To Go Joe!