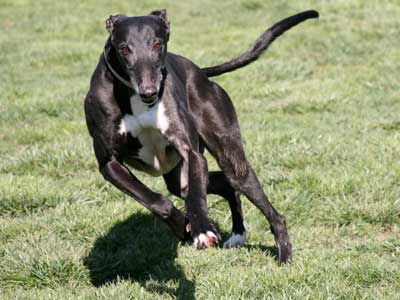 Way to Go Joe traveled from Florida to Oregon just to go into the adoption program. He waited his turn and now has a family of his own.

Salem, Oregon—November 9, 2008 Joe the Greyhound turned over a remarkable milestone when the rain clouds parted.

Joey, a beautiful black greyhound started out in life as a shy dog.

It’s not a bad thing to be so shy, it only means that he is even more special and his expectations of his family are different than other greyhounds.

Joey came to Greyhound Gardens on Feb. 4, 2004. He was petrified. Petrified of his shadow, petrified of anything new and petrified of change. He wanted structure and consistency in his world. When he arrived at the gardens, his whole world changed. He had new friends, he had an acre and he had a new bed.

He loved the acre. He ran like the wind, and he loved to run. Coming in became his first challenge. He watched the other greyhounds and tried to imitate them, but crossing the threshold into the house was way too scary. Sometimes it took 60–90 minutes just to work up the courage.

Within a week of his arrival, the Joey kennel was established. A 16 x 8 foot enclosed kennel was stationed just outside the back door. For the mommas, it made a difficult event possible. He went to the Joey kennel when the mommas had to leave. Joey longed to be with his new friends and when time wasn’t an issue, he was playing and digging and running.

Getting Joey back in was coined “the Joey run.” The mommas would circle the backyard until Joey went to the spot in which he allowed them to catch him and take him inside.

During the winter of 2006, Joey made greyt strides and started to come in on his own. He would go to the back door and after the 5th, 10th or even 20th try, he’d cross the threshold all by himself. The Joey kennel soon became overgrown with grass.

Joey’s next big moment was when he discovered “outdoor momma food”. At the very moment he nibbled on his first Sunday morning donut, he knew there was more to be had and the bribes officially began. 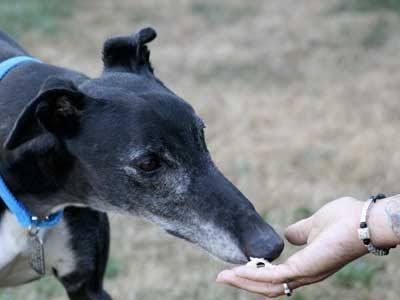 A morsel of turkey appeared to be the quickest to Joey’s heart. 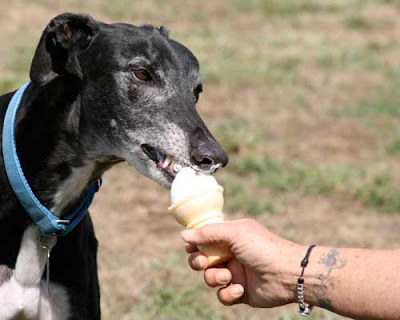 And if turkey was good, an ice cream cone had to be better.

Joey always hung close to the other greyhounds as they stood to get their ears scritched. His eyes said he wanted to get his ears scritched too, but the hand, no matter how slowly it moved toward him, was way too scary and he would quickly back away.

In the last few months, backing away became a game and Joey was a tease. He’d touch the fingers with his nose, only to bounce back into playbow, dance in a circle and come back for more. 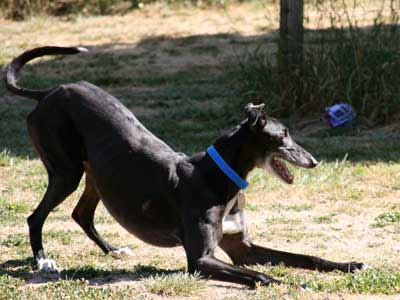 But Sunday afternoon, Nov. 9, Joey stood still to have his ears scritched amongst the safety of the other greyhounds. A grand day, one worth celebrating. 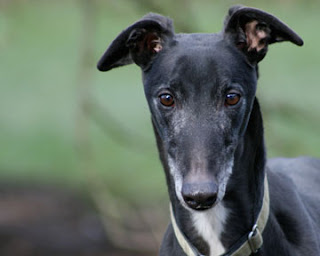 Way To Go Joe a puppy in a litter of five, you were born to be a racer, but yet as you celebrate your 7th birthday you remain a happy, happy boy frightened of the two people that love you the most.

We’re not giving up though Joe. We’ll entice you treats and every day we’ll ask you to come and get your ears scritched. I suspect when least expect it, you’ll be by our sides ready for the lovin’ you so richly deserve.