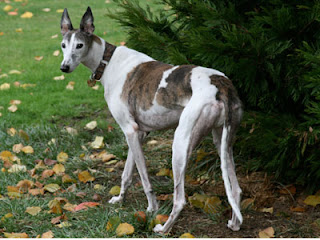 Pasha • Valley Shylock
We made a promise to three very sweet girls, and just this week, we kept our promise once again.

Gracie joined us when she was 11 years old, she’d been in a home for several years and yet because of her momma’s crazy hours, she didn’t seem happy. We loved her with all our hearts and she in turn loved us. 14 months later she left us after cancer sadly took her away.

Cleo came to us at 10 years old, just one week after Gracie left. Cleo had been in her home for many years and again, returned. Diagnosed with cancer, Cleo left us two years after joining us. She wasn’t to sure at first about having so many brothers and sisters, but she adapted and was such a sparkle in our lives.

Barbie had been left at the Humane Society when she was 10 years old. Again, she left her home of many years to become a Greyhound Garden hound. 14 months after her arrival, we lost her to cancer.

The three girls have so much in common. Their arrivals were greeted with excitement and happiness and a feeling that they had been with us from the very beginning and all three left us much sooner than what we hoped for. We also gave them a promise, that if another double-digit greyhound needed a home, we would open our hearts and our home. The reasons they lost their home really didn’t matter, it only matters that they a place with plenty of love to come to.

On Sunday, Nov. 2, Pasha became a Greyhound Garden dog. He’s 12 1/2 years old and he’s fabulous. His family was moving out of state and were afraid the move would be to hard on him. As I write this, he’s laying down on a cushion beside my desk and very content.